Chilocco students leaving to fight in the Korean War

I was working on a quilt challenge yesterday that involved incorporating text into a visual design. I had the design part down, but I was struggling with what words to use. As usual, my mind wandered over to my family & I thought about listing all the people whom I love. This path led me to thinking about my grandpa, Leo Roach. He’s alive & well, mind you! But he lost two brothers during World War II & that’s about all I knew of my family members who had died fighting for our country. So, in an effort to procrastinate on my quilt design work, I decided to google my grandpa’s name- What followed was an interesting journey that kept me up until the wee hours of the morning.

A few pages into the Google results was a small PDF link. It had his name and some gobbledygook listed after it in the description, so I clicked on it. The link turned out to be a fully scanned copy of the Class of 1950 Chilocco Indian School yearbook preserved by the National Archives. Now, a few years ago, purely by chance, I found another website that had a partial scan of the Class of 1953 yearbook, which was my grandpa and grandma’s Senior year. I always thought, “What are the chances of the yearbook from the exact year of my grandparents’ graduation would be online? & no other years??” Random. But I digress. This was a full copy and detailed my grandpa’s Junior year. Oh, this yearbook was even more fun than the 1953 version!

My grandpa is on the top row, second from the left.

My grandpa is top row, second from the right.

I was giggling out loud looking at all his photos. Did he really have a one-armed tennis coach named Mr. Bearskin?? heehee

“But, Rebecca,” you may ask, “Why was he a Junior in 1950 and a Senior in 1953?” The answer is simple- The Korean War happened. He lied about being old enough to enlist and joined the Army along with his buddies. This information was just about all I knew about his time overseas, except for a brief story he told me when I was younger. I remember we brought home a DVD of Saving Private Ryan for him to watch, thinking that he would enjoy it since John Wayne movies were in heavy rotation in the DVD player. But my grandpa watched it in stone silence. At the end, we asked him, “Well, did you like it?” and he replied, “I don’t know if ‘like’ is the correct term.” He then told the account of a battle in Korea where he stood helplessly as his buddy right next to him was blown to pieces. And then he walked away to his room and closed the door. It was the first time that I realized how many memories he had wrapped up inside of him, & it made me weep.

Back to the yearbook in my browser! I hoped that if they had this particular yearbook, then they might have other yearbooks, as well. I changed the name in the address from 1950.pdf to 1951.pdf and the next one started loading up for viewing. On one of the first pages was a dedication to the students from Chilocco who went off to war and the photo at the top of this post accompanied it. A few pages later was a photo of them getting on a train to Camp Polk, Louisiana and I strained my eyes to see if I could find my grandpa.

I think my grandpa is in the bottom photo, but I'm not sure...

This was the first time that I knew his exact Army company & I began to research what happened to them. They traveled to Hokkaido, Japan from New Orleans shortly after my grandpa turned 18 years old in March 1951. On December 28th, 1951, they then traveled to Inchon and the battlefields of war. My mind started to drift to my grandpa’s story about his friend’s death and I started looking for those students who didn’t make it home. I found out that two of them had died on January 24th, 1952. Their names were Joe Green and Sequoyah Thompson & I went back to the 1950 yearbook to see if I could find a visual connection between them & my grandpa. I didn’t have to look far. If you scroll up in this post, you’ll find Joe Green on the bottom row of that Tennis Team photo. Sequoyah Thompson is standing on the opposite end of my grandpa’s row in the Student Council photo and he was only a Sophomore. For once, I had faces to match up with the stories. They were just boys. Once they got on that train to Camp Polk, they didn’t know their feet would never again walk across that Oklahoma red clay.

After I found their names, I did a google search on them, too. For Joe, I found out a few more biographical details. But for Sequoyah, I found something very interesting. In 2007, a Korean War veteran had posted in a forum searching for the relatives of Sequoyah. The Army Central ID lab had recovered remains from Korea & they needed a family member to provide a sample of mDNA to verify the match. I immediately went to the Central ID Lab website to look and see if he was still on the Urgent list. He was not. However, I’m not sure if they did find a family member to give a sample, or if they simply removed him from the public list. If that’s the case, then his remains might still be in a box in Hawaii.

Well, by the time I had researched all this, it was about 2:00 in the morning and I straggled into bed. Today, Memorial Day, I called up my Aunt and told her about what I had found online. (My grandpa has terrible hearing & my voice over the phone is ESPECIALLY one of the sounds he can’t hear!) I told her that I remembered the story about his friend dying in Korea and she said, “If I remember correctly, it was his cousin that died- not just a friend.” I asked her to pass on what I found and chatted for a while about our Memorial Day plans. Not long after we hung up, I got a text message from her that said my grandpa was very choked up. Sequoyah Thompson was indeed his cousin who died while standing right next to him. But he didn’t think there would be any pieces of him left to find by the Army ID lab. I replied that they had to have something that tied the remains to him- a dogtag, a piece of uniform- otherwise, they wouldn’t have put him on the Urgent List. So, this has all put a new mystery in my head- Where is Sequoyah now? That’s a quest for another day, however. Today is for remembering all the soldiers who fought and died for our country. For Joe Green and Sequoyah Thompson and all the young men and women who sacrificed everything. You are not forgotten.

I had to stay home this weekend, so I worked on one of my patterns for a teepee sewing box. I wrote out all the directions, drew all my pattern pieces & illustrations, & had high hopes for a good prototype. However, I've got a ways to go. I just know there's a better way, you know? I've got to wrap my brain around it, somehow! Anyways, we just started watching The Town, so I better go get my popcorn & give my sewing machine Rory a rest. Night!

I’ve decided to put one of my babies in the Spring Blogger’s Quilt Festival @ Amy’s Creative Side. Say hello to “Happy”! She measures 72 inches square and was finished early in 2009 for the Dallas Quilt Show. HOWEVER, she actually began her journey way back in 2007. I created the pattern in Illustrator and was determined to make this quilt with a pieced background and needle-turned appliqué elements. I worked for months & month & MONTHS, but I never felt like it was going to be done. Enter 2008 & the birth of Spoonflower!

I designed several little bits of artwork to create my own fabric & had a lot of fun being one of the first people to use this wonderful service. One night, I was sifting through files to create a pattern repeat & accidentally opened up the file for Happy. It was a lightbulb moment! I took the entire applique design and split it in half. Then, I uploaded it to Spoonflower as a four yard long continuous design & waited for my order to come home to me from North Carolina. I sliced the two halves apart, sewed them back together as a whole unit with a single long seam up the center, & commenced hand quilting! Being a deadline driven person, I entered it into the Dallas Quilt Show in the hopes of finally seeing a finished product one day. & I finished. Well, I almost finished… My quilting doesn’t go all the way out to the edges & I’m pretty sure I was still sewing on the binding during the car ride over to drop it off at Dallas Market Hall! Oh well. Live & learn.

I pulled Happy out of the brown paper bag she’s resided in since March of 2009 and it made me a little sad. She deserves more love than that! But I have no idea what to do with her, so she primly sits on my guest bed waiting for me to figure everything out. Oh, & I almost forgot to mention that she has a cutie polka dot backing!

Well, thanks for stopping by! Enjoy more quilts from the Blogger’s Festival!!!

Today is a difficult holiday for me because my momma passed away last year on April 6th. She was 55 years old. I COMPLETELY avoided Mother’s Day last year because it was just too painful. Everywhere you turn- in stores, on the TV, all over the internet- there are advertisements showing moms & daughters hugging & laughing & being happy… showing moments that I won’t ever experience again.

Anyways, I decided to make a memorial quilt in her honor. Inspired by some stencil art from France, I decided to create a small art piece that would be based on a photo of her. About three months after she had passed, I finally had the courage to sit down and look for the perfect photo for my project. Unfortunately, I lasted about 5 minutes before breaking down into tears! I had to put away the bags of photos and pull myself together. It was about another three months before I could make myself look through the photos again and I did manage to choose one. However, once I scanned it and started working in photoshop, the tears flowed again. I guess it was something about having to zoom in really closely & having her face fill up my computer screen life-sized that overwhelmed me. Anyways, gradually, every few months, I’ve been going back to it and taking care of a few steps. The holes will end up going through all three layers, so I’ve got a ways to go. I’m not one for fusing, so I’ve been turning under a seam allowance on each hole & they are getting harder & harder to do as the size dwindles down. I’m currently regretting the busy print, though. This might end up being the back side of the quilt, so I can put a solid or near solid fabric on the front. I’m thinking about using black tulle to create some more definition, as well. I’m not sure if this quilt will ever be finished, but something tells me that I’m not making it to be finished. I’m making it to heal… 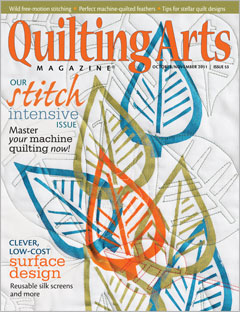 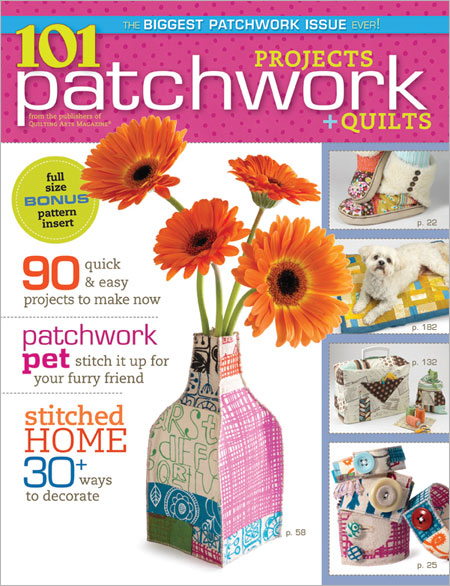